Turkmenistan Accredited the European Union Ambassador for the First Time 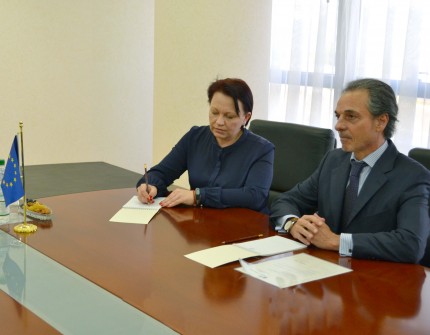 Welcoming the guest and congratulating him on his appointment to a responsible post, President Gurbanguly Berdimuhamedov stressed that the European vector is one of the key directions of our country's foreign policy strategy. The head of state conveyed his greetings to the EU leadership and noted with satisfaction that over the past year’s relations between Turkmenistan and the European community have been steadily developing on a bilateral and multilateral basis, and joint projects and programs in various fields have been successfully implemented and implemented.

During the meeting, the sides exchanged views on aspects of enhancing partnership in a number of key areas, including political, economic, legal, humanitarian and environmental spheres. In this regard, a significant role is assigned to the European Union's Representative office in Turkmenistan opened in Ashgabat in 2019, which is designed to give impetus to the development of cooperation, more effective and efficient, and in General – to contribute to the successful implementation of the new EU Strategy for Central Asia.

Special emphasis was placed on strengthening peace, stability and security, and countering global threats and challenges of our time. As Ambassador Diego Ruiz Alonso stressed, the European Union highly appreciates and supports the creative international initiatives put forward by President Gurbanguly Berdimuhamedov aimed at developing balanced solutions to current problems of concern to the entire world community, creating optimal conditions for sustainable development on a regional and global scale. In this context, the UN Resolution adopted on the proposal of the Turkmen side to declare 2021 the International year of peace and trust has a special meaning.

The subject of increased attention was the formation of new international transport routes on the Eurasian continent, which is dictated by the very nature of the globalization of the world economy.

Ensuring energy security, diversifying energy supplies to world markets, and resolving the situation in Afghanistan, to which Turkmenistan has made a significant contribution over the years, were also identified as priority aspects of cooperation.

The construction of the Turkmenistan-Afghanistan-Pakistan-India gas pipeline, power transmission lines and fiber-optic communication along the Turkmenistan-Afghanistan-Pakistan route, and the modernization of the railway and highway network that became part of the “Lapis lazuli” transit and transport corridor-the implementation of these projects will help solve social and humanitarian issues and create new prospects for the development of fruitful cooperation in the region.

During the conversation, the sides confirmed their mutual desire to strengthen effective partnership in such strategic areas as environmental protection, adaptation to climate change, diversification and digitalization of the economy, support for the private sector, water resources management, democratization of society, ensuring human rights, investment in youth, and many others.

They noted the importance of expanding cooperation in the legal sphere, taking into account the ongoing democratic reforms in our country, including the creation of a bicameral Parliament.

The issues of preparation for the celebration of the 25th anniversary of permanent neutrality of Turkmenistan were touched upon. The anniversary of the foreign policy status of our country will be dedicated to the high-level international conference "the Policy of neutrality and its importance in ensuring international peace, security and sustainable development", which is scheduled to be held on December 12 this year in Ashgabat.

The diplomat said that the EU expects effective cooperation with Turkmenistan.