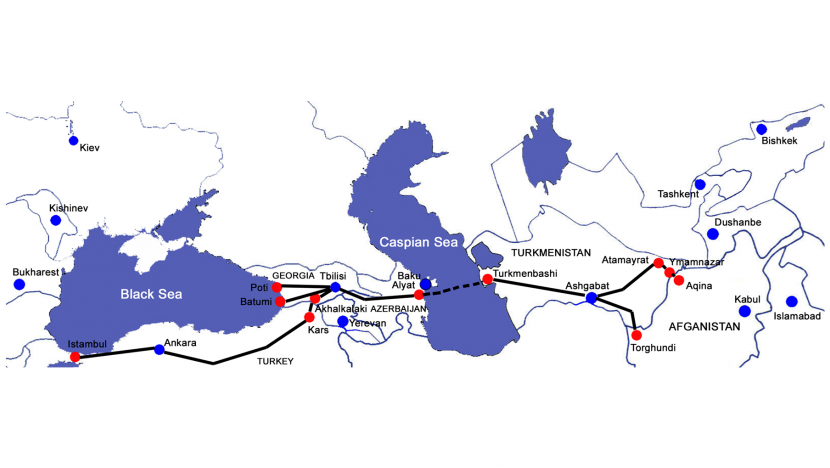 The Embassy of Turkmenistan in Georgia jointly with CBA Kaizen organized a conference in Tbilisi on the investment climate of Turkmenistan, Trend reports referring to the Turkmen Foreign Ministry.

An exchange of views took place on the development of the transport and logistics system of Turkmenistan, in particular along the Lapis Lazuli, the Caspian Sea - Black Sea transport corridors, and other projects.

The unique nature of the economic development and investment climate of Turkmenistan was noted at the conference.

The agreement on transit and transport cooperation Lapis Lazuli between Afghanistan, Azerbaijan, Georgia, Turkey and Turkmenistan was signed on Nov. 15, 2017 at the ministerial meeting of the 7th Regional Economic Cooperation Conference on Afghanistan in Ashgabat.

According to the Lapis Lazuli project, railways and highways should connect the Afghan Turgundi city of Herat province with Ashgabat, then with the Caspian Turkmenbashi port. The corridor will extended to Baku, then through Tbilisi to Ankara with links to Poti and Batumi cities, then from Ankara to Istanbul. The project budget, which aims to facilitate transit logistics and simplify customs procedures, is estimated at $2 billion.

Lapis Lazuli is an international transit route opened in 2018 linking Afghanistan to Turkey via Turkmenistan, Azerbaijan and Georgia. The name “Lapis Lazuli” is derived from the historic route that Afghanistan's lapis lazuli and other semiprecious stones were exported along, over 2,000 years ago, to the Caucasus, Russia, the Balkans, Europe, and North Africa along the ancient Silk Road. The initiative will serve to reinforce the Afghan Government's Infrastructure and Connectivity Development, Energy, and Private Sector Development National Priority Programs. The Lapis Lazuli corridor is funded by the Asian Development Bank. Currently, the transit project’s budget is estimated at $2 billion.