Turkmenistan has very few rivers. All of them are found in the border areas, and due to the lack of high mountains with glaciers, shortage of rainfall and arid climate, many rivers are shallow and often dry up by late summer. The only exception is the Amu Darya, which rises in the mountains of Tajikistan and Afghanistan, flowing north of Turkmenistan. However, all the rivers are intensively used for irrigation, which takes water supplies, scarce enough without adding this, and as a result, some of them never reach their former riverbed. The Amu Darya, the largest river in Central Asia, is the most significant in Turkmenistan too.The Amu Darya, or Amudarya River, is 2.580 km long and formed by the junction of the Vakhsh and Pandj rivers, which flow out of the Pamir Mountains. It follows a northwesterly course, marking much of the northern border of Afghanistan with Tajikistan, Uzbekistan, and Turkmenistan before flowing through the Karakum desert of Turkmenistan and Uzbekistan, and spilling into the Aral Sea through a broad delta.

The river drains 466.200 sq km. It flows swiftly until it reaches the Karakum where its course braids into several channels. The Amu Darya provides water for irrigation, but this heavy draw on its water has prevented the Amu Darya from replenishing the Aral Sea.

In ancient times the Amu Darya was called the Oxus and figured importantly in the history of Persia and in the campaigns of Alexander the Great.The Oxus River was the name that the classical Greek geographers (such as Herodotus) used for the Amu Darya (Darya is Persian for "sea").The area beyond the Oxus (from a European or Middle Eastern viewpoint) used to be called Transoxiana (meaning "beyond the Oxus") by the Greeks. Later on, it was referred to as Maworaunnahr (meaning "beyond the river") by the Arabs.Entering the country on the eastern border, it flows north-west, becoming, some distance further, a natural border between Turkmenistan and Uzbekistan. The Amu Darya in its initial course in the territory of Turkmenistan branches the Karakum Canal, sometimes called Karakumdarya, which runs for1445 km and passes the cities such as: Mary, Ashgabat, Tedjen, Serdar, and ends in Balkanabad. On average, the channel takes 45% of the Amu Darya waters. In addition, in the lower reaches of the Amu Darya, there is the Kunyadarya channel which passes near the legendary Kunya-Urgench runs to territory of Turkmenistan.

Turkmenistan's only river flowing into the Caspian Sea is Atrek. 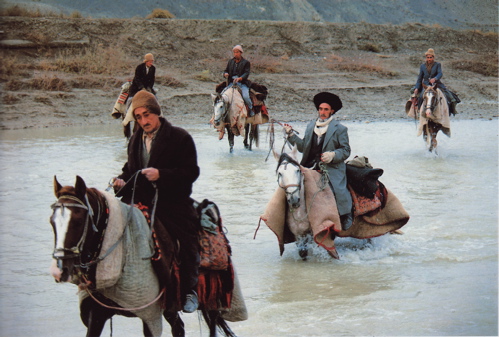 But it is fed by the snow and rain water from the Kopet Dag ridge and consequently becomes shallow by the end of spring. Besides, most of the water flow is taken to irrigate the surrounding lands. Along with the Atrek, other small rivers and streams, also used for irrigation, flow down the slopes of Kopet Dag. Some of them Kelyat-Chai, Kyzyl-Arvat , Guza , Firyuzinka and others fall into the Karakum Canal, while the others completely dissolve in the sands of the Karakum Desert.

In addition to all the rivers mentioned above, there are two relatively large rivers - the Tedjen and Murgab, which form a delta of canals and ditches covered by hectares of agricultural fields. If the waters of these rivers were not used for irrigation, they would fall into the Amu Darya.