There are about 30 museums in Turkmenistan, located in the capital and in all velayats. Also, there will soon be build large museum complex in picturesque foothills of the Kopetdag Mountains. This excellent small museum houses archaeological finds from sites around Turkmenistan. The collection of items from Nisa, a Partian site very near Ashgabat, is particularly interesting. Do not miss the display of ivory ritons. The model of Nisa is very helpful to anyone who intends to visit the site.
Address: 1 Shevchenko Street;
Hours: Daily 10:00am to 6:00pm, closed Monday.

This museum houses an eclectic mixture of fine arts and crafts. Most surprising are the Renaissance paintings and sculptures. More interesting to visitors are the rooms filled with carpets and jewelry of the various Turkmen tribes. Address: 84 Mahktumguli Prospect;
Hours: Daily 10:00am to 5:30pm, closed Tuesdays.


Exhibits of paintings and sculptures by contemporary Turkmen artists. The gallery shop has works for sale.
Address: 33 Zhitnikova Street;
Hours: Daily 10:00 to 6:00pm

About 200 people are employed here to produce what are known as “Bukhara” carpets. The visitor is invited to watch and take pictures of the staff knotting the carpets. Some carpets are sold here. Carpets purchased from the factory have one advantage over those sold at other sources: you do not have to obtain an export permit for them. The receipt is all you need for airport customs.
Address: 23 Liebknecht Street;
Hours: 10:00am to 6:00pm, closed from 1:00 to 2:00 pm for lunch.

This museum has a large, impressive collection of antique carpets and also the largest Turkmen carpet in the world. Groups may reserve in advance for a tour (10 or more people) and reduced entry fees. Please note there are charges for picture taking and video taping. Next door is the museum shop. Carpets purchased here will also receive a license and permit (which you will be charged for) for airport customs.
Address: 5 Gorogly Street;
Hours: Daily 10:00 am to 6:00pm, closed for lunch between 1:00 and 2:00pm, closed Sundays. This museum has exhibits of archeological finds from sites excavated in the Mary oasis, including material from the Bronze Age, sites of Gonur adn Togoluk and the cities of ancient Merv. The building in which the museum is housed is itself worth a visit, as are the museum’s other exhibits.
Located in the city of Mary at 1 Komsomolskaya Street (5 hours by car from Ashgabat);
Tel: (37022) 3-27-22;
Hours: Daily 10:00am to 5:00pm

This museum possesses an interesting collection of artifacts from the Lebab velayat, which also included cities on the Silk Road.
Located in the city of Charjou (7 hours by car from Ashgabat) on 35 Shaidjanov Street;
Hours: Daily 10:00am to 5:00pm, closed Mondays.

Although the history of the city begins in 1717 when the Russians marched on Khiva, the museum has interesting artifacts from the Seljuk empire when Genghis Khan invaded from the steppes through TransCaspia (The region east of the Caspian).
Located at 2 Magtymova Street, Turkmenbashi (about a 7 hour drive by car from Ashgabat);
Hours: Daily 10:00am to 5:00 pm, closed Mondays. 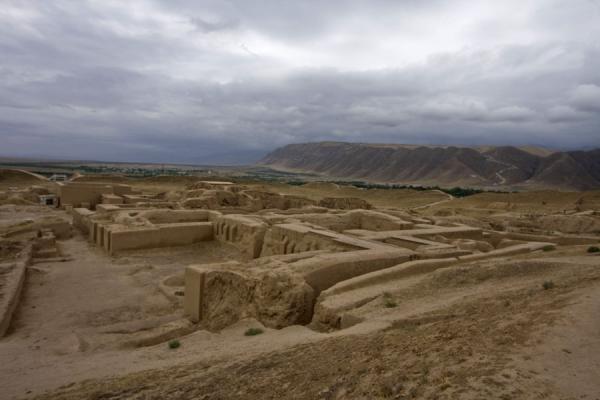 This site includes the remians of the Parthian fortress of Nisa (second century B.C. through the second century A.D.) In ancient times, this fortress included the treasury of the king of the Arshakid Dynasty.
Located in the Akhal velayat, settlement of Bagyr (30 minutes by car from Ashgabat);
Hours: 8:30 am to 5:00 pm, closed Tuesdays.

Merv, a stop on the ancient Silk Road to the Far East, is the largest ancient site that has been discovered in Turkmenistan. The mausoleum of Sultan Sanjar, located there, is Merv’s most famous structure. It was built during the tenth through the twelfth centuries, A.D. Located about 1 hour by car from the city of Mary.

Geok-Depe is a fortress from the nineteenth century where a particularily bloody battle (1881) was fought between the Turkmen and the Russians who were attempting to take over Turkmenistan. In 1995, a mosque was built to commemorate the battle of Geok-Depe.
Located in the Akhal velayat, town of Geok-depe (40 minutes by car from Ashgabat);
Hours: Daily 10:00am to 5:00pm. This site is near the ancient oasis of Sarakh. Here, the visator can see ruins of the mausoleum of Abu-Said Mayhene, an oriental philosopher(1049).

The mausoleum of the religios leader Abdul-Fazla (1024) is located here. This mausoleum is one of the most complete architectural works of art still standing in Turkmenistan. Located in the Akhal velayat, village of Sarakhs (4.5 hours by car from Ashgabat). 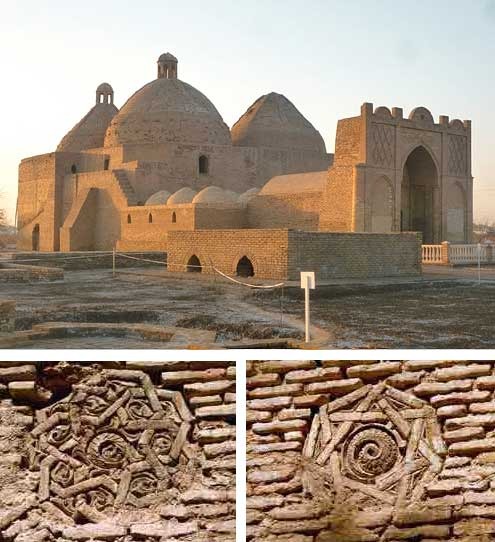 The mausoleum of Astan-Baba is a unique structure located at this site, northwest from the town of Kerki. It has been rebuilt many times during the centuries. Located 3 hours by car from Charjou. Dekhistan is considered the most important oasis in southwest Turkmenistan. On this site the city of Misrian reached its peak when it belonged to the Shahs of Khoresm (end of the 15th century). Only a few ruins remain.
Located in the Kizilatrek region, village of Madau (about 7 hours by car from Ashgabat). In the Middle Ages, a powerful, state controlled Shah of Khorsem was located here. This city was destroyed by the army of the Emir of Samarkand Teimour (1388). The Tyrabek-Khanum Palace is one of the architectural monuments here.
Located at 79 Moskovskaya Street, city of Keneurgench in the Dashhouz velayat (8 hours by car from Ashgabat).

Serdar Yoly – multi-stepped roads built through the mountain scenery and the length of which is 8,24 kilometers. They outline the mountainous terrain features and give the chance to enjoy nature and air alongside with walking.

Baherden karst cave Kovata – formed as the result of carbonaceous deposits for million years. It is located in the Kopetdag Mountains, 90 km to the west of Ashgabat. The total length of the cave is 230 m, the depth from the main entrance is 65 m, the breadth is 50m, and its height is from 15 to 26m. Now there are 276 steps to the underground terminal spring. The lake famous for its high curative value occupies the most part of the cave territory. The lake is 72m in length, 30m in breadth, and 10m in depth on the average.

The Koytendag Mountains are considered to be the most ancient, and here, besides sand-rock and limestone one can see Jurassic period rocks on the surface. There are several unique natural monuments in the mountains, namely the magnificent, serpentine canyon Umbardere with its waterfall cascading on the height of 28m; the hydrogen sulfide terminal spring Kaynar-baba, the clove Kyrk-gyz, the grove Unabi, the karst freshwater lake Koyten. But perhaps the most original sight of the Koytendag is the famous karst Karlyuk caves in which, according to the legend, onyx for Tamerlane’s tomb had been mined. The caves present gallery of halls, decorated with stalactites and stalagmites, formed from gypsum, calcite, onyx, and argonyths. Plateau of Dinosaurs (500 m long, 200m wide) excites special interest. It is located near the village of Khodjalil-ata, and has more than 2500 footprints of ancient pangolins (upper Jurassic period, about 150 million years ago), both phytophagous iguanodons and predators.