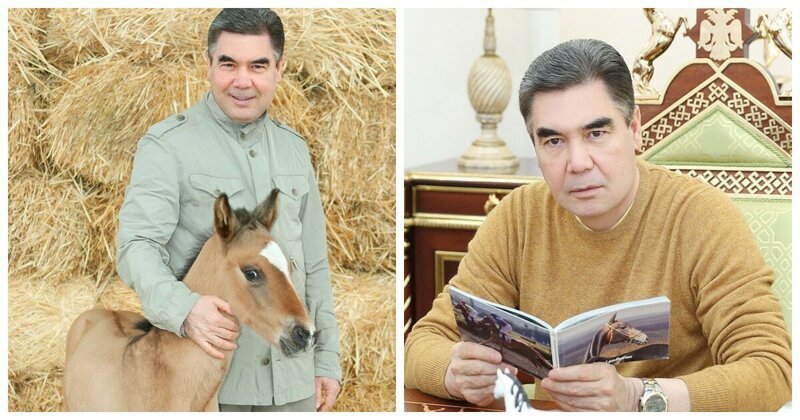 President Gurbanguly Berdimuhamedov has visited the International Akhalteke Horse Breeding Complex to devote some time to writing in his study.

As reported, earlier this week the head of state made a tour of inspection of the premises of the Facilities Management Department (the Ministry of the Interior). While on the premises, the Supreme Commander-in-Chief of the Armed Forces of the country was presented a dun foal born on the first day of 2019.

It is truly a joyous occasion for Turkmen breeders when foals, directly descended from famed Akhalteke horses, are born. And this happens quite often. Yet the birth of the foal at the start of the year designated as “Turkmenistan – the Home of Prosperity” is seen as highly symbolic.

It is yet another sign of good luck, wellbeing, and success in important activities. Therefore, the head of state gave the foal a lilting name ‘Rovach’.

“At – myrat” - “A horse is an aim”, as a wise age-old Turkmen saying goes. It precisely and meaningfully expresses an attitude of Turkmens towards their equines, regarded as helpmates as well as friends and lifetime companions. Not only are horses praised for their strength, speed and loyalty, people also draw much inspiration communing with them, admiring the beauty and harmony of these creatures.

The Turkmen people have lovingly preserved and retained through the centuries a large array of catch phrases, expressions, sayings and proverbs about Akhalteke horses, celebrated by poets and artists. Folk memory has passed down from generation to generation true gems of Turkmen folklore and oral tradition: songs, destans (folk epic poems), folk tales, fairy stories, legends and parables. They provide a vivid and diversified portrayal of Akhalteke stallions, and reflect an attitude of Turkmens towards them that often serves as a measure of many positive human qualities.

There are also many modern literary works and films about Akhalteke horses. Scores of treatises have been written on these horses, in which researchers illustrate the importance of the breed for the world’s horse-breeding.

The books authored by the head of Turkmenistan hold a special place among them. Translated into foreign languages, they have offered a welcome opportunity to connoisseurs and lovers of Akhalteke horses throughout the world to receive a wealth of information about the precious treasure of the nation and humankind.

... President Gurbanguly Berdimuhamedov devoted his new poem to the foal Rovach, a symbolic harbinger of success in endeavors this year. Having imbued the poem with his firm belief in achieving goals, high expectations for a happy future of the beloved people and his native country, the head of state describes through poetry a beautiful, strong and fast stallion little Rovach (now clinging close to the caring hands) will turn into when he grows.

In the same way, our plans turn into real achievements and dreams come true, if we embark on the right road while adopting clear guidelines and well-defined objectives.

These lines, praising the determination to reach high goals and the stallion, a token of our victories and accomplishments, which represents the nation’s spirit and rapid development of Turkmenistan, society and economy, are a poetic call and at the same time, an ardent revelation.

It is the understanding of his people, their culture and historical aspirations that has helped the head of state to find the right guiding principles of domestic and foreign policy. Listening to the people and seeking their advice is one of the fundamental principles that the President of Turkmenistan sticks to.

The head of state is known to devote his very rare free time to thoughts about his home country and concern for people’s welfare. As a brilliant rider, true connoisseur of ‘’heavenly’’ horses, the head of state often spends his leisure time communing with horses. President Gurbanguly Berdimuhamedov, an ardent admirer and respected authority on Akhalteke horses, a great popularizer of the breed and national horse breeding, gives close attention to equestrian sport in our country.

The Akhalteke horse as a perfect embodiment of ideological impulse of the new epoch – the time of active creativity, inspiration, spiritual growth and creation, conveys a central message of 2019 designated as “Turkmenistan - the Home of Prosperity”.

The message implies that we should never stop at what has been accomplished and continue to develop, opening up new vistas for our country’s further advance towards the heights of progress and prosperity.
afghanistan.tmembassy.gov.tm
10.01.2019
FaLang translation system by Faboba