Unique natural complexes of the Kopetdag, its geological structure, landscape, flora and fauna, river network have been attracting the attention of scientists and local history specialists, travellers and tourists since old time. Activity of Kopetdag Sate Natural Reserve, which was forty on August 19 since its foundation, is aimed at study and protection of th unique mountain ecosystem. The reserve occupies most valuable territory of the Central and Eastern Kopetdag. Founded for composite study and protection of ecosystems of foothill valley, unique juniper and wild mountain forests, wonderful representatives of fauna like wild ram, bezoar goat, leopard, Caspian snowcock and others, the reserve is located on the territory of Ahal velayat in middle mountain belt on the area of more than 50 thousand hectares. There are two preserves in the area of responsibility of the reserve – mountain Guryhovdan and foothill Meana-Chaachin Preserves. Landscape is cut by deep gorges abounded with springs, rocky parts with height differences from 700 to 2800 metres above the sea level; there are a plateau with herbage even during summer heat and submountain planes. There are two natural monuments adjoining to the territory of the reserve – Karayalchi, small groves of walnut and juniper thickets with the area of 20 hectares located on the border with Western Kopetdag and Charlyk, pistachio grove of two thousand hecatres at the foothills of Eastern Kopetdag.


Despite dry and extreme continental climate, plantation of the reserve is very rich and various; there are more than 40 percent of total amount of Turkmenistan flora breeds. The uniqueness of the region is not only in the quantity of breeds but in presence of relic, rare and endemic plants, many of which are included the Red Book of Turkmenistan and Red List of International Union for Conservation of Nature (IUCN). Kopetdag-Khorasan endemic - evergreen Turkmen juniper or archa, the main forest forming arboreous breed is spread there. Its sparse growth occupies more than 20 thousand hectares making more than half of the total area of archa forests of the Kopetdag Ridge. Height growth of this plant is relatively small, about 3 – 7 cm per year but the age of it may reach 600 – 800 years. The height of such old-timers may reach 20 meters and girth of the trunk – 3 meters. Owing to strong root system, archa not only protects steep mountain slopes and rock formations from destruction, preventing water and wind erosion of the soil but also stand against adverse weather, providing favourable conditions for the plants growing next to it. Relic of Mediterranean flora – the walnut, is also very valuable. Persian and Turkestan mountain ash occupies special place among the plants of the Kopetdag. Its scattered populations can be met at Germab section of the reserve. Excellent material for selection is presented by wild Turkmen pears and apples because as is known, it was wild growing types that took part in formation of various cultural breeds of apples, which are more than 10 thousand today. Grass plant, small and large, bright and undistinguished, which life is very short, are important component of mountains’ ecosystems of the reserve. The Kopetdag is rich is beautifully blossoming decorative plants, which vegetate from early spring until late autumn. Four types of tulips among sixteen in Turkmenistan grow on the territory of Kopetdag Reserve. Hyacinthella transcaspica and hyacinth litwinovii amaze with their beauty. There are unique plants, which included the Red Book of the country like Popoviolimon turcomanicum, Silene czopandagensis, Allium vavilovii, Senecio khorossanicus, Psephellus kopet-daghensis. Colutea kopetdaghensis is included into the Red List of International Union for Conservation of Nature (IUCN).


The Kopetdag Mountains are abounded with medicinal plants including strawflower, St. John's wort, rhubarb, resinous ferrule, dioecious Bryonia, blackberry, hawthorn, barberry, dog rose and others. There are ferns growing in humid places among stones and rock cracks. The Red Book of Turkmenistan includes three breeds of them - Ceterach officinarum, Anogramma leptophylla and Asplenium trichomanes. There are Amygdalus scoparia among interesting arboreous and frutescent plants, which looks more like ephedra rather than leaf-bearing tree, Lonicera oblongifolia and many other species, which are important elements in complex network of ecosystems. The world of non-vascular plants of the Kopetdag is quite diverse; mosses and lichens are the first that start growing on bare barren surface. The variety of their species can be observed on rocks, soil surface and trees’ rind. Being very sensitive to environmental changes, they are natural indicators of the purity of nature. Some of the 422 species of these plants are included into the Red Book of Turkmenistan.


The fauna is distinguished by big variety. There more than thousand species of invertebrates in the boundaries of the reserve. These are various butterflies and predators like dragonflies and praying mantis as well as arachnids, which are the oldest inhabitants of the planet, including poisonous scorpion, camel spider and black widow. 17 types of insects are included into the Red Book of the country and wingless grasshopper - Saga pedo – into the IUCN the Red List. Few breeds of fishes like Alburnoides bipunctatus, Schizothorax pelzami and Nemachilus sargadensis and three species of amphibians live in small shallow rivers of Kopetdag like Archabil, Keltechinar, Chyrlak (Sharlavuk), Meanachay and others. Submountain area is home for reptiles; four types of them - Chalcides ocellatus, Lacerta defilippii (Elbrus lizard), Telescopus rhynopoma (Iranian cat snake), Macrovipera lebetina turanica (Central Asian viper), are protected by the state. 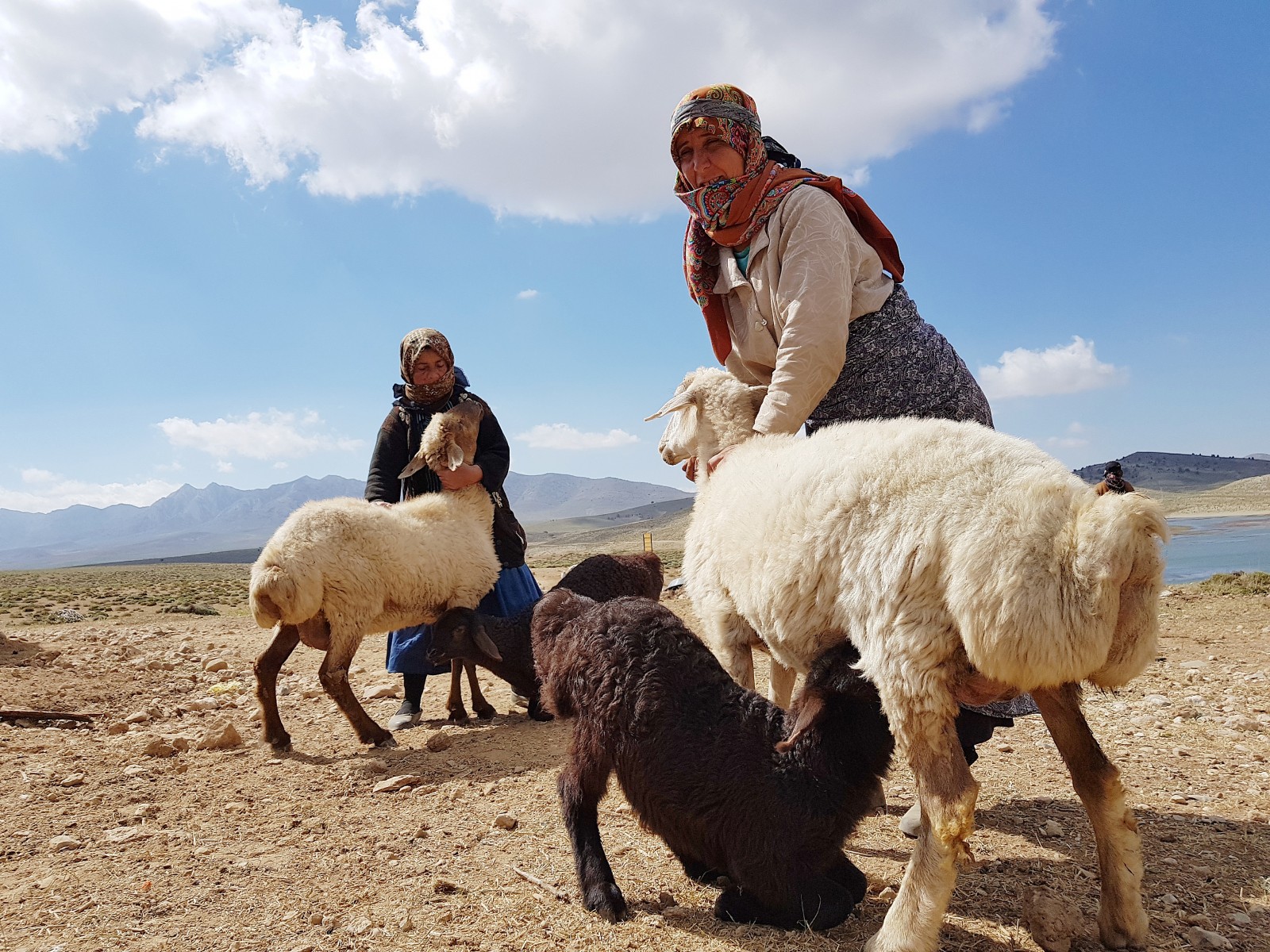 The avifauna is represented by 150 species. One can enjoy there with majestic flights of predator birds – white-head vulture, black griffon and neophron. Crested, meadow, double-spotted and steppe lurks can be met at plane sectors and bearded vultures on the rocks. Black stork makes its nests at high hardly accessible places, on rock juts; representative of the Galliformes “red book” bird – Caspian snowcock, very rare bird with distinguishing behaviour, settles at steep slopes. Spring – Autumn route of mass migration of grey cranes lays via Meana-Chaachin Preserve and in certain years more than twenty thousands birds can be observed there. Black stork, Short-toed snake eagle, golden eagle, bearded vulture, Saker falcon, peregrine, Caspian snowcock and little bustard are included into the Red Book of Turkmenistan and the CITES List. The mammals are represented by few tens of species, 17 of which like lesser horseshoe bat, Shauby noctule bat, honey badger, Pallas’ Cat and others are included into the Red Book of our country. Three-colour bat, stripped hyena, Persian leopard, onager, goitered gazelle, bezoar goat, argali (urial) are included in the IUCN Red List


As a result of scientific and research works undertaken in XIX – XX centuries in the Eastern Central and Western Kopetdag, the important material about natural wealth of the region was gathered, breed composition of flora and fauna of the reserve was established. From the moment of foundation of the Reserve, the work for inventory, collection and processing of the data about conditions of the ecosystems of the region, which is annually reflected in “Chronicles of Nature” publication, is carried out.