HOW OLD IS ASHGABAT?


Folk etymology reads the name of Ashgabat as "the city of love". This, however, does not necessarily reflect the name of this or that area. It is quite often that the original meaning gets lost. 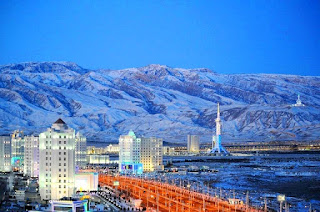 Famous philologist of the first half of the XX century A.Potseluyevsky was probably the first to doubt the accepted in literature meaning of the word, "Ashkhabat" (Ashgabat in Turkmen language). He believed that "Ashk" was the name of one of the Parthian kings, although Soviet-time booklets and brochures maintained only one version - "the city of love", where "Ashg" stood for "love" or "devotion". The "Big Russian-Turkmen dictionary" (1986) translates "love" in a Turkmenized manner, as "Yshk" or "Ashyk". But the city is not called "Eskhabat" or "Ashkhabat" or "Ashykabat". It is called "Ashgabat" in Turkmen.


It was not by accident that famous scientists doubted the city's forced name. Archeologist with no less reputation A.A.Marushenko shared the view of philologist A.Potseluyevsky in pointing to the Parthian origin of the city's name. Researcher of the Turkmen-Seljuk history S.G.Agajanov was of the same opinion too. Historian Kh.Ovnuk, who specialized in history of Farsi, confirmed that in Persian literature of the Middle Ages Parthian king&'s dynasty of Arsakids (Arshakids) was called Ashkanids and dynasty's founder Arshak I - Ashk I. We should also add that the capital of Turkmenistan, Ashgabat, is situated less than 10 km from the former residence of Parthian kings, Nisa, a cradle of the great Parthian Empire. 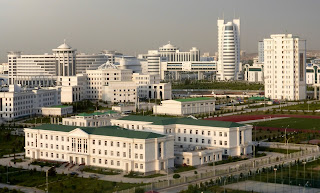 Nobody doubts today that Arsakids, descendants of Dakh-Massaget (Scythian-Sarmat) group, generally known as "Turs" (Turanians), are the ancestors of Turkmens.


This is proved by ethnonymy, toponymy, paper sources, archaeology and ethnology.


But what about the assertion that Ashgabat is only slightly over 100 and that it was founded in 1881 in a village where tsar's troops were stationed? This date was imposed on us as the only one during Soviet times.


Let's look up in the history. The outskirts of Ashgabat have been cultivated by people since old times. Numerous watercourses, a suitable position, and a plain itself attracted primitive people. Archaeologists A.A.Marushenko and V.A. Rakov discovered flinty nucleus in the bed of the Ashgabadka river that served as an instrument of the Stone Age man. A.A.Marushenko, who surveyed the Ashgabat region, resumed that the city stands in the area of the ancient settlement of primitive people. 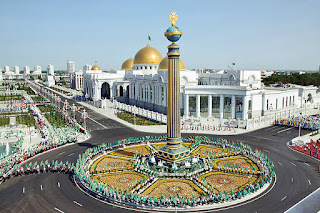 ...The year of 329 BC. The Army of Alexander the Great stopped at Nisa for wintering. Numerous trophies and cumbersome train made it hard to move any further. As ancient historian Kurtsy Ruf writes, "...[Alexander the Great] ordered to put in one place, first, his stuff and then stuff of all soldiers, except for the necessaries. Trains laden with trophies were piled in a wide plain. While everybody waited for king's orders, he ordered take beasts of burden away and to set the rest of the stuff on fire. He was the first to fire his own stuff. And none dared to mourn the price of his blood, given the fact that the same fire burned the king's riches."


In Russian Archaeologist I.N.Hlopin's opinion, the event described above took place in the outskirts of Ashgabat.


In 100 years, when the Macedonian Empire collapsed, followed by the state of Selevkids, a new state was born in Southern Turkmenistan governed by two brothers, Arsak and Tiridat. These lands became the core of the emerging Parthian Empire, a world power of antiquity. It was exactly that time (III century BC) that a well-fortified fortress was built in the territory of today's Ashgabat. Archaeological data (Parthian ceramics and other gear) indicate that. Nobody doubts that it was built on Arsakids' order.

Could it be that the contemporary Ashgabat derived its name from this fortress? In any case, the city's birthday should be attributed to exactly this date - the middle of the III century BC. Both ancient Merv (the citadel of Erkgala) and Kunyaurgench and all other cities with over 1000-year history were fortresses in the beginning.


The fortress of Ashgabat was turned into a fortified castle of the local governor in the Middle Ages, retaining its strategic importance. This castle was particularly flourishing in Turkmen-Seljuk times (XI-XII centuries). The fortification had round towers made of fine burned bricks and a solid foundation. Archaeologists found many bronze and ceramic works there. The castle stood in the center of the modern Ashgabat. 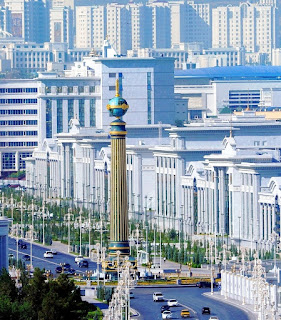 In the XIII century, the flourishing lands of Turkmenistan were completely devastated by Chingizhan's hordes. Many cities were razed to the ground. Some of them were reconstructed, but Ashgabat stood as it was for a long time. There was a small village there. The fortress was reconstructed in the XVIII-XIX centuries.


Ashgabat was surrounded by fortresses during that time and served as an alarm-post for Turkmens-Teke. In the same year a strong Khivian squad led by Khubbikuli Khoji, having killed many people, devastated Ashgabat and the area between Ashgabat and Mehine (Meana).


In 1853, foreign troops under the command of prince Feridun-Mirza entered the Turkmen land. The advanced-guard headed by Emir-Khan faced harsh resistance at the approaches to Ashgabat. The clash continued for over an hour, and it was only thanks to the prince's troops that made it in time that Turkmens retreated. Having stayed in Ashgabat for a while, Feridun-Mirza ordered to destroy Ashgabat and 36 fortifications around it.


But even after that Ashgabat was still called an inhabited locality. In 1856, Turkmens from Ashgabat took 10,000 horsemen against the governor of Astrabat.


In 1871, Russian explorer Stebnitsky wrote in his "Notes about Turkmenistan": "The city of Askhabat..., trading with Khiva and Persia, has a population slightly exceeding that of Karyz... over one half of fortifications' citizens grow wheat and the rest of them grow fruit." He continued: "Askhabat is a city, yet there is a fortification; there are up to 4000 kibitkas in Askhabat."

It means that 10 years before the so-called "foundation" (1881) of Ashgabat it was already called the city, even in the Russian sources! And the number of citizens was impressive. It has to be mentioned that the city traded with Khiva and Persia. And the second part of the compound, "abat" (city) explicitly points to the fact that it was the city indeed and not the village.


Let's compare the population of Ashgabat in 1871 and 1892. The city accounted for up to 4000 kibitkas, according to Stebnitsky. Proceeding from the factual considerations, there should have lived a man, a women and children in each kibitka. Even counting at a minimum rate, taking 2 as an average, we will have 16,000 people living in Ashgabat in 1871, and 13,000 people in 1892, 10 years after the so-called "foundation".


These facts make us reconsider the date of birth of the city and the interpretation of its name.


In 1948, Ashgabat was razed to the ground by the powerful earthquake of the XX century. Then it grew up again. Up until recently, however, the city was caught in a web of "slum"; there stood houses for temporal use. There was not a single residential building with improved comfort. The city lacked cultural, educational, administrative and other buildings. And only after Turkmenistan gained independence the situation changed drastically. It is simply impossible to recall everything that has been built over just 13 years of independence!


Those who were away from Ashgabat for about 10 years will not recognize a white-marble capital of Turkmenistan today. Citizens of the city themselves do not have enough time to see all its new sights - so fast is the pace of construction of new roads, luxury houses, new administrations and cultural-educational establishments. This is the way the city of "divine Arshak", accounting for a 2000-year history, is reviving.